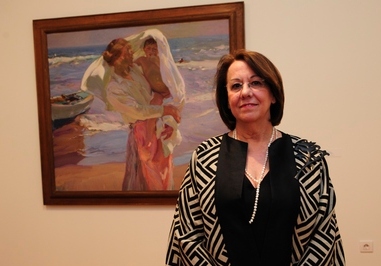 Joaquín Sorolla was a late 19th-century Spanish painter, famous for his use of light in his portraits and landscapes. At his death in 1923, his wife Clotilde García del Castillo left his house and most of his personal belongings to the State. Today, the house hosts a small museum, the Sorolla Museum, run for the last four years by Consuelo Luca de Tena.

Luca de Tena was tasked with attracting more foreigners at her arrival and the museum now gets 160,000 visitors a year of which 20 to 30% are foreigners. “We’ve started a tourist route, for those who want to see a more genuine and intimate side of Madrid, which includes four other museums that host art collections in the house of an influential figure: the Museum of Romanticism, the Cerralbo Museum, the Decorative Arts Museum and the Foundation Lazaro Galdiano.

However, one of the conditions set by Sorolla’s wife was that the museum should be exclusively dedicated to Sorolla’s life and work. Therefore, both temporary exhibitions hosted every year there are created with items in storage, which include about 5,000 drawings, 4,000 photographs, correspondence, sculptures and ceramics. Luca de Tena explains: “Every exhibition offers a new perspective on the artists, his work, his life… So it never gets repetitive, even if our choice is a little restricted. We are also going to be opening another exhibition space very nearby, which could host exhibitions linked to Sorolla but not exclusively dedicated to him.”

The Pink Robe. After the Bath

Surprisingly enough, although Sorolla lived in Paris, and therefore was widely renowned in Europe during his life, he is not exhibited very much in foreign museums*: “another of my objectives is to encourage his pieces to travel around Europe, and we are currently organising to lend some paintings to museums in Munich and Giverny.”

But let’s discover a bit more about the woman who’s making it all happen. When asked how she got into the art world, Consuelo Luca de Tena answered: “My father was a painter, so I was brought up in the arty world, I then studied history of art at university, specialising in fine arts, and have never regretted the decision since”. The director’s favourite piece in the museum is Sorolla’s Pink Robe because of the play on light in all its forms: be it direct, filtered, reflected, fragmented. Sometimes I feel as though the light is coming from the painting itself.”

Consuelo’s top tip for a local bite to eat is at Las Tortillas de Gabino restaurant on Rafael Calvo Street, not far from the museum. “It’s a very lively place with a good atmosphere and a warm welcome and reasonably priced”.

For a culture fix, Luca de Tena prefers the Thyssen to the Prado, for its more welcoming and slightly more intimate atmosphere.

*In 2019, the National Gallery (London) hosted "Sorolla: Spanish Master of Light", a major exhibition on the works of Joaquín Sorolla.