Chavenage House: keeping it in the family 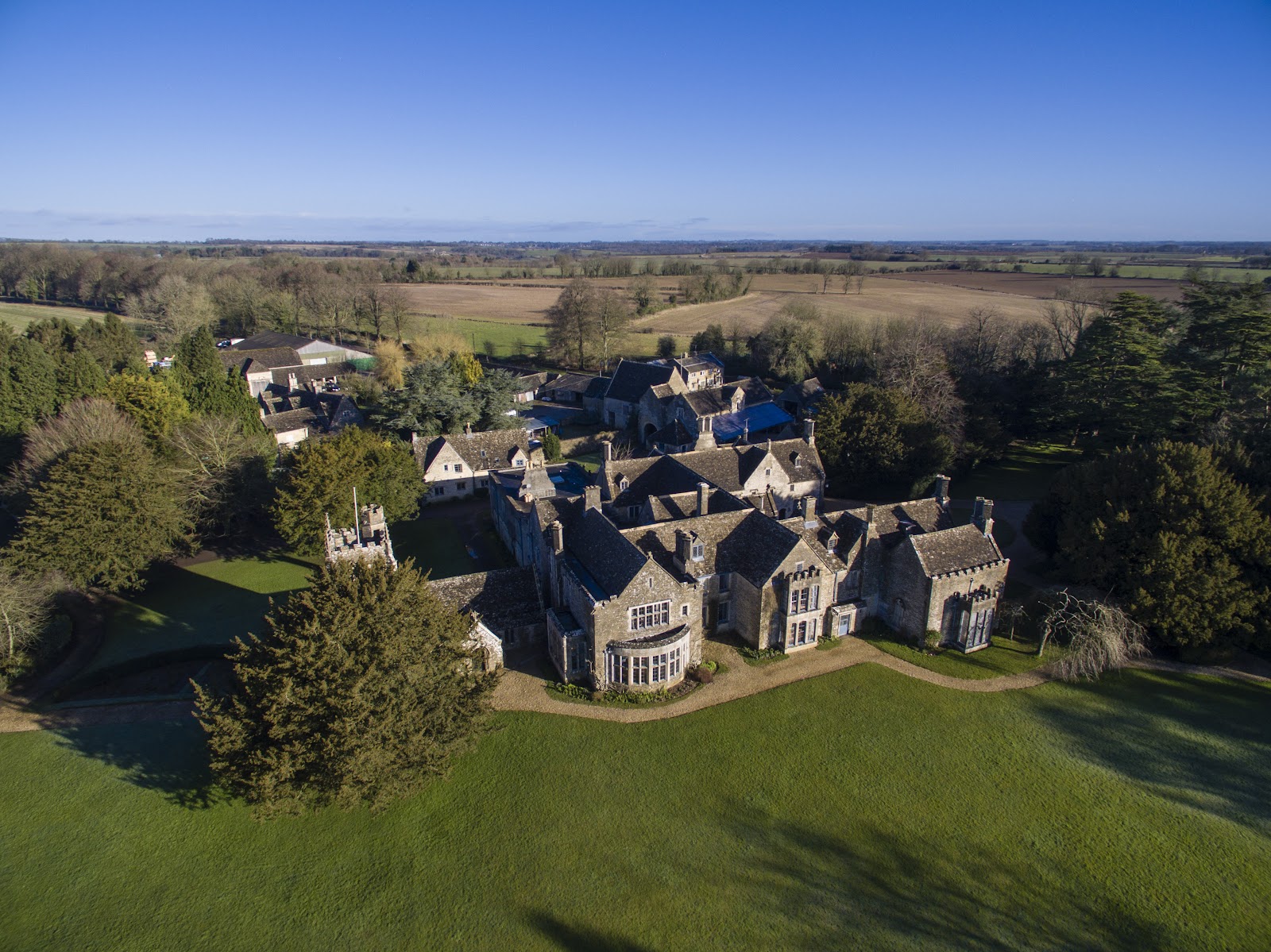 Caroline Lowsley-Williams is in her office, next door to the stable yard where she is bemoaning the cancelation of a visit to Chavenage by a group arriving on a cruise ship in Bristol. It was just before the breakout of Covid 19 and lockdown in England. Little do we know at that moment that Chavenage will be closed to the public along with every other historic house in the UK, for the next few months. 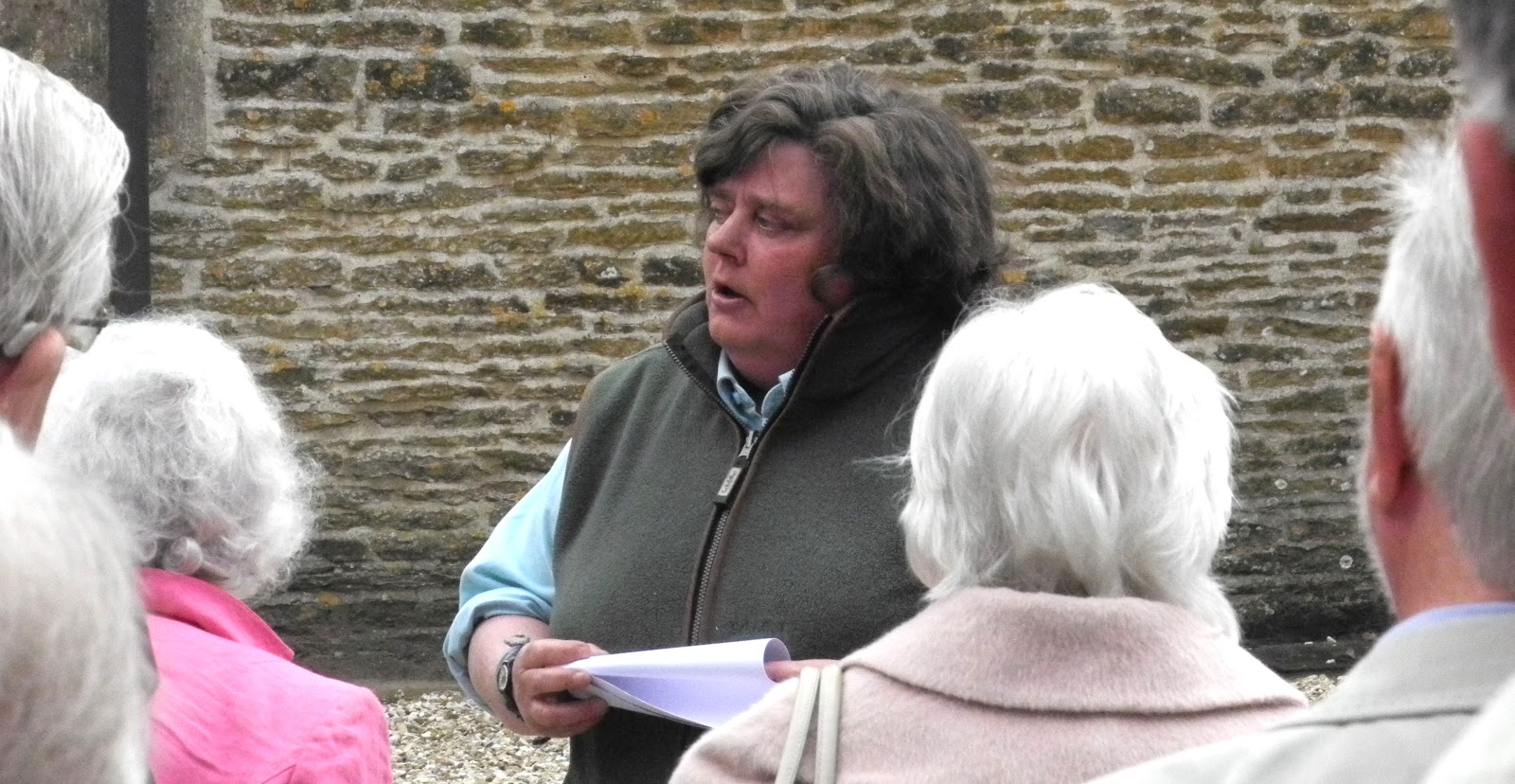 Occupied by her parents, sister and brother and their families, Chavenage is a genuine family house and has been in the Lowsley-Williams family since 1891. Indeed it has only been the home of two families since Edward  Stevens first bought the estate in 1564. The house has been welcoming visitors since the 70s but has since hit the limelight as the setting for a series of period tv dramas and films including  Poldark and Emma. ‘Poldark lovers can't wait to see the driveway, the minstrels,’ gallery and the ballroom,' says Caroline. 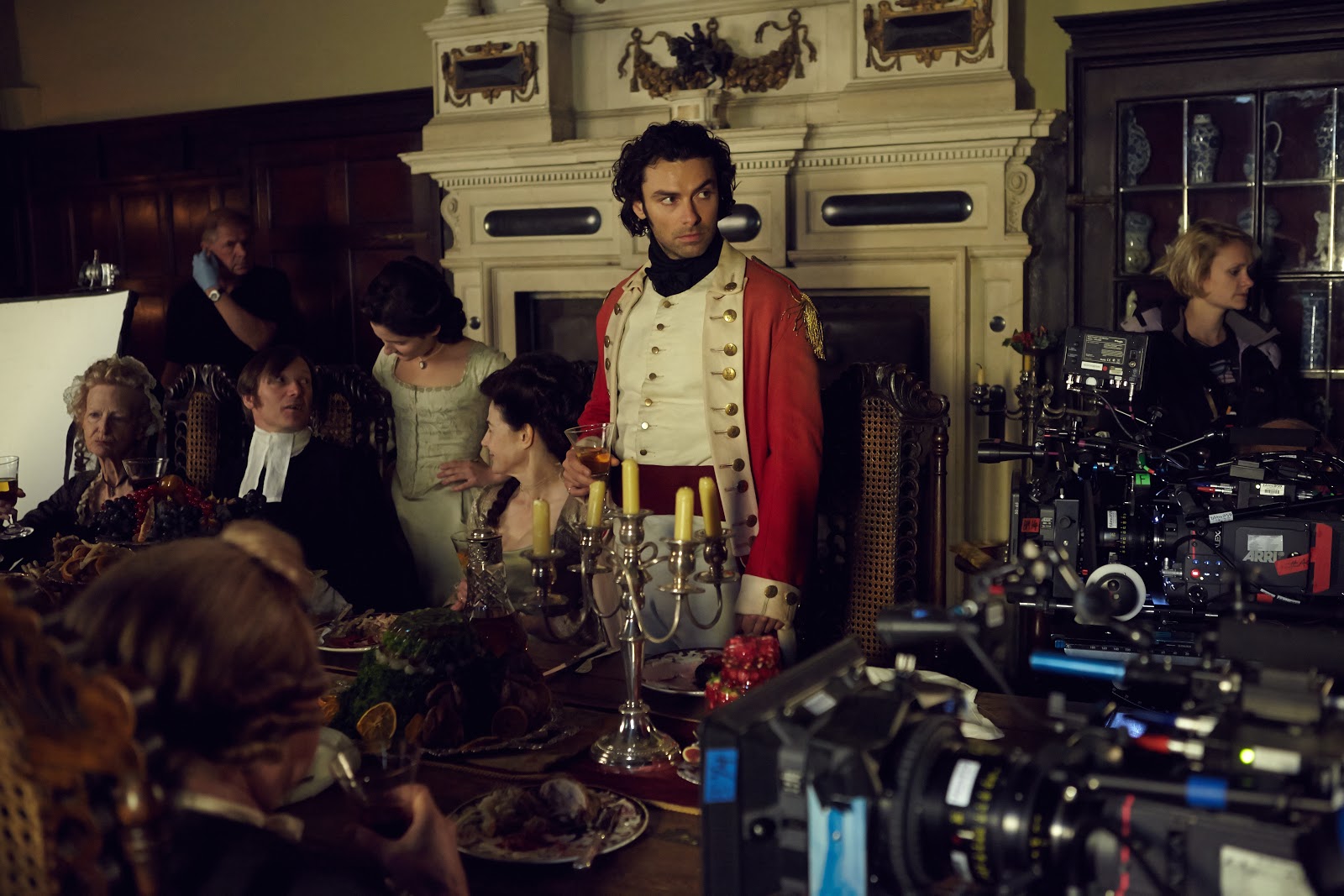 Poldark standing in front of the fireplace in the Oak Room

We walk round to the front of the house to start our visit. It’s a  stunning asymmetric vernacular facade with a monumental stained glass-paned window on the left of a porch which also has a  distinctly ecclesiastical look to it. Caroline explains that the house was built using bits and pieces thanks to the dissolution of the monasteries. Caroline tells me that the facade has scarcely changed since Edward  Stevens built it. 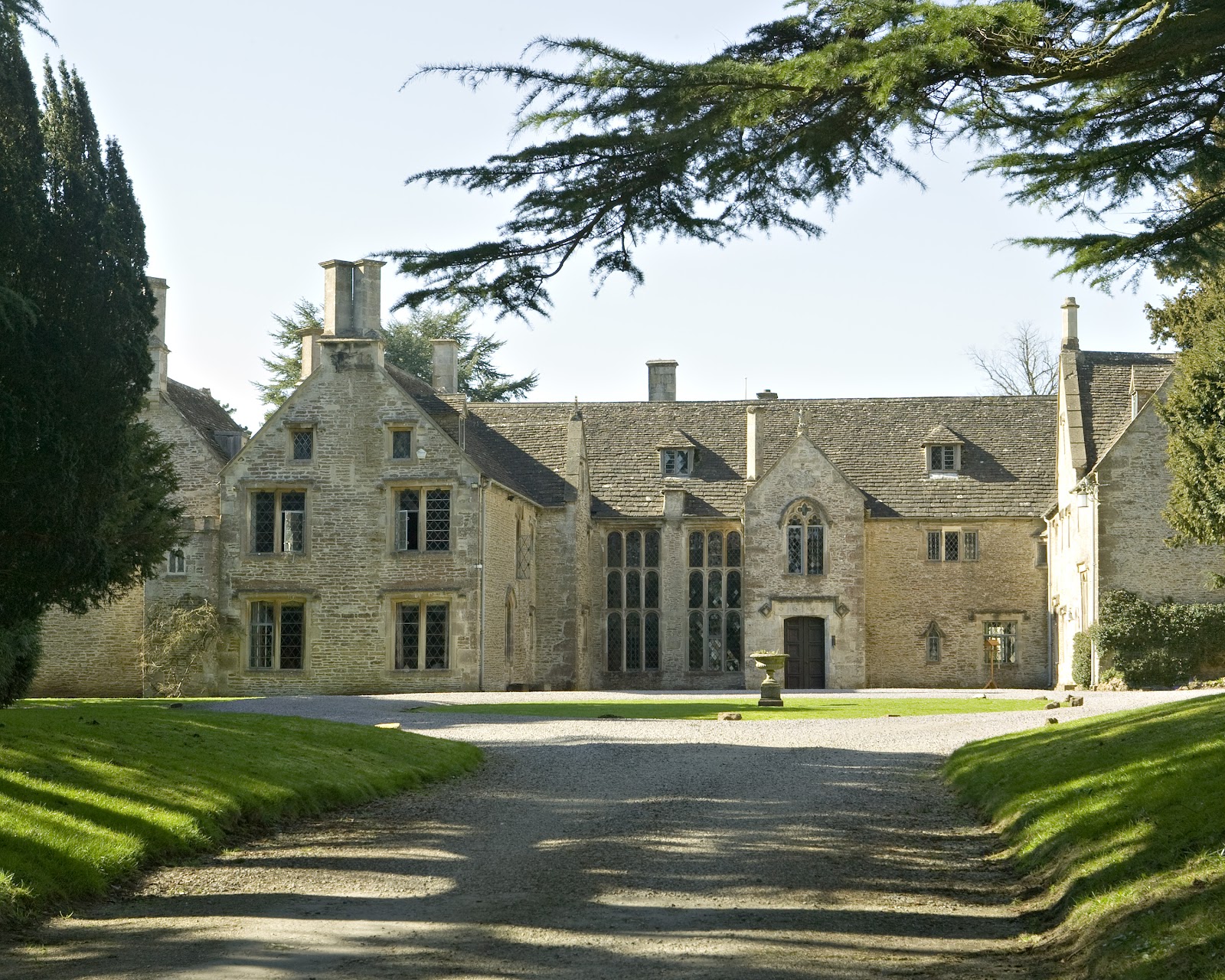 The E-shaped facade, typical of the Elizabethan period

Apart from releasing various artefacts for the construction of Chavenage, the dissolution of the monasteries had another important impact on Chavenage: it passed from the Church to the Crown and was subsequently given to Sir Thomas Seymour by Henry VIII when Henry married  Sir Thomas’ sister,  Jane. But when Seymour was later executed for treason the house passed back to the Crown and was then sold to Edward Stephens who already had several estates in the surrounding area.

It was Stephens who carried out the major work, the results of which we see today. He gutted the medieval building and built the porch and the two wings making it into a classic Elizabethan house,  explains Caroline pointing to the door of the entrance where you can see  '1576' and the initials E and J,  the initials of Stephens and his wife Joan.

I follow Caroline into the house, and the porch opens into the two-story  Great Hall where we can see the full effect of the stained glass windows which we admired from the outside. Caroline explains that the panelling dates back to  1627. There is a huge fireplace which was probably installed in the 18th century and a minstrel's gallery where an organ was more recently installed. The ancestral portraits are those of Caroline’s family. the  Houles,  who were industrialists and owners of  foundries  in Staffordshire. 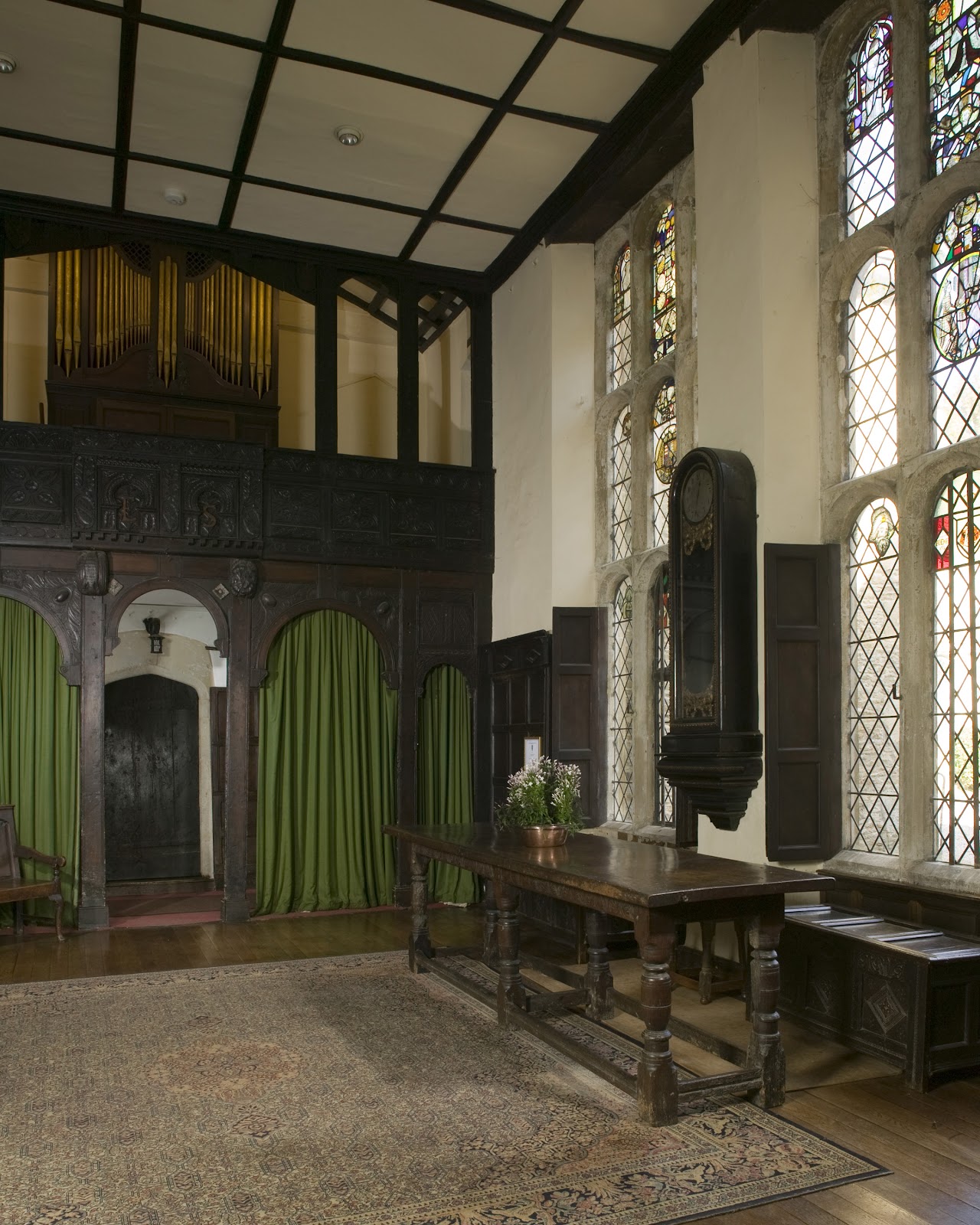 The Lowsley-Williams ended up owning the place by a series of events.  George Williams Lowsley-Hoole,  the grandfather of David Lowsley-Williams (the current owner) inherited a nearby estate, thanks to the lack of a direct heir.  He came down from York to inspect his inheritance and stayed with a friend,  Sir George Holford at nearby  Westonbirt.  Having told Holford that he was not overly fond of what he had inherited,  Holford told him that  Chavenage was for sale. So Williams Lowsley-Hoole rented, then bought it.

In  1958 the family ran out of direct descendants and it was left to David Lowsley-Williams. He inherited it from his Uncle John (who had no children)  on the day he married Rona McCorquadale. 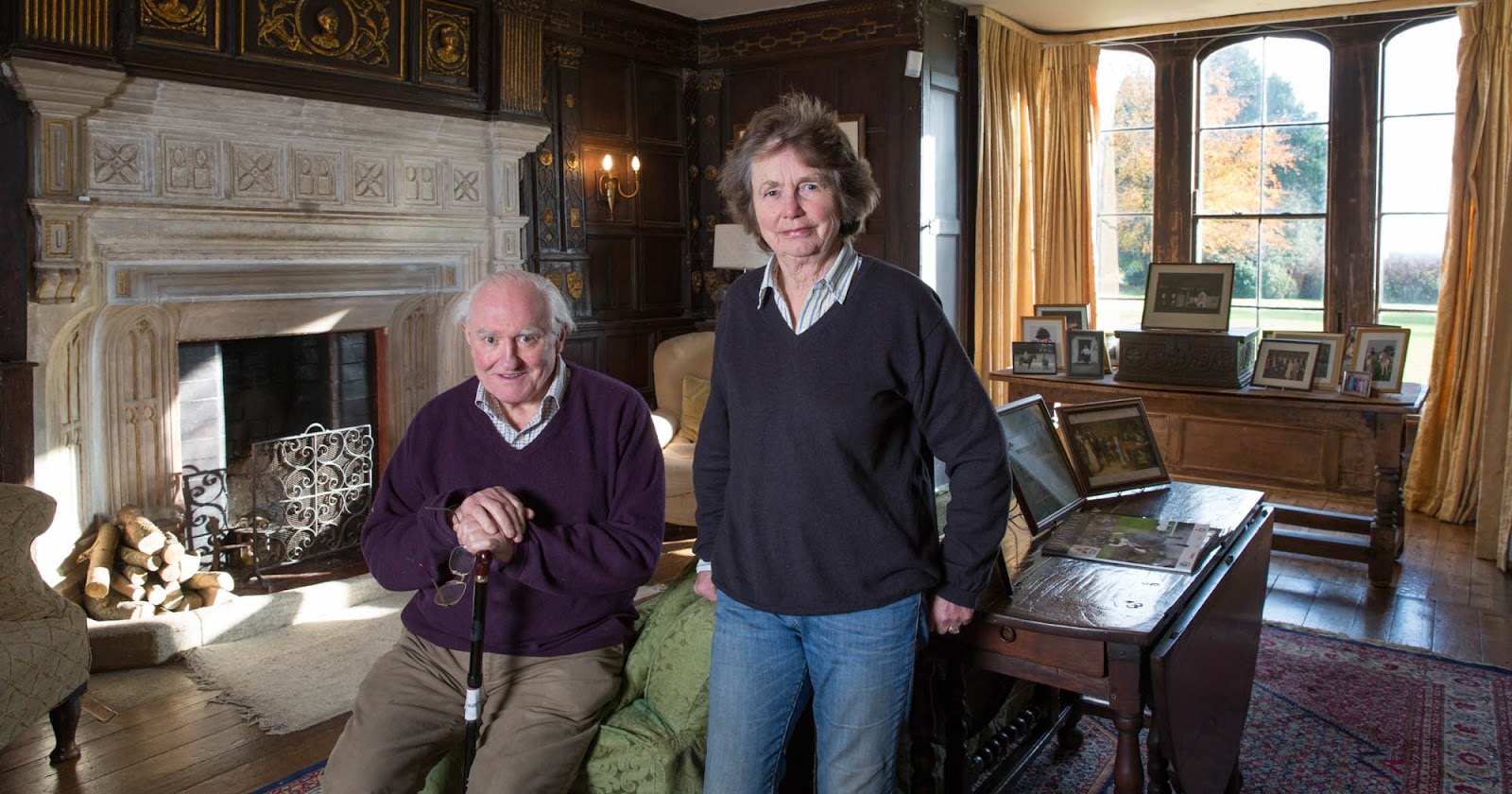 By contrast to the Great Hall, the next-door Oak Room is small and cosy. Once again the exquisite wood-panelling (decorated with gilded depictions of the Four Muses),  and the fireplace, both date back to 1627; though the gothic fireplace has been partially filled in more recently with a more practical hearth.  Poldark fans will recognise this room from the film.

In 1903 when the Lowsley-Williams bought Chevanage  (having rented it initially) they decided it was too small for them and built an extensive new wing which includes a  ballroom with a  sprung floor and service rooms which have now been converted into family quarters.

Major restoration then took place in the 1970s costing over  £40,000 (probably the equivalent of ten times the amount today) which  meant they had to open it to the public twice a week in order to get a grant from the government.  The family, therefore, moved out of the main part of the house into the old service rooms. 'Today we run the whole place which still includes 2,000 acres of land without any staff: it’s just down to me, my brother and sister,' says Caroline.  Last year, we had 10,000 visitors largely thanks to Poldark which has brought people from all over the world and thanks to it, we’ve had five rooms painted and got nine sets of new curtains and a new lawnmower. Good old Poldark,’ says Caroline. 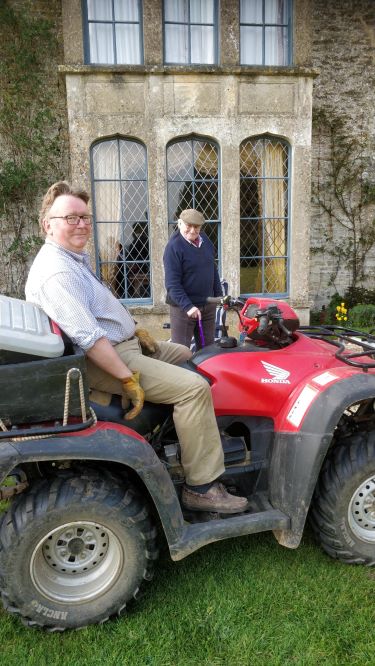 Upstairs there are two fascinating rooms which are all part of the Elizabethan part of the house.  Cromwell’s Room which is entirely lined with a forest design.  Mortlake tapestry dating back to  1640. The original painting of Cromwell by Sir Peter Lely has been replaced by a copy. 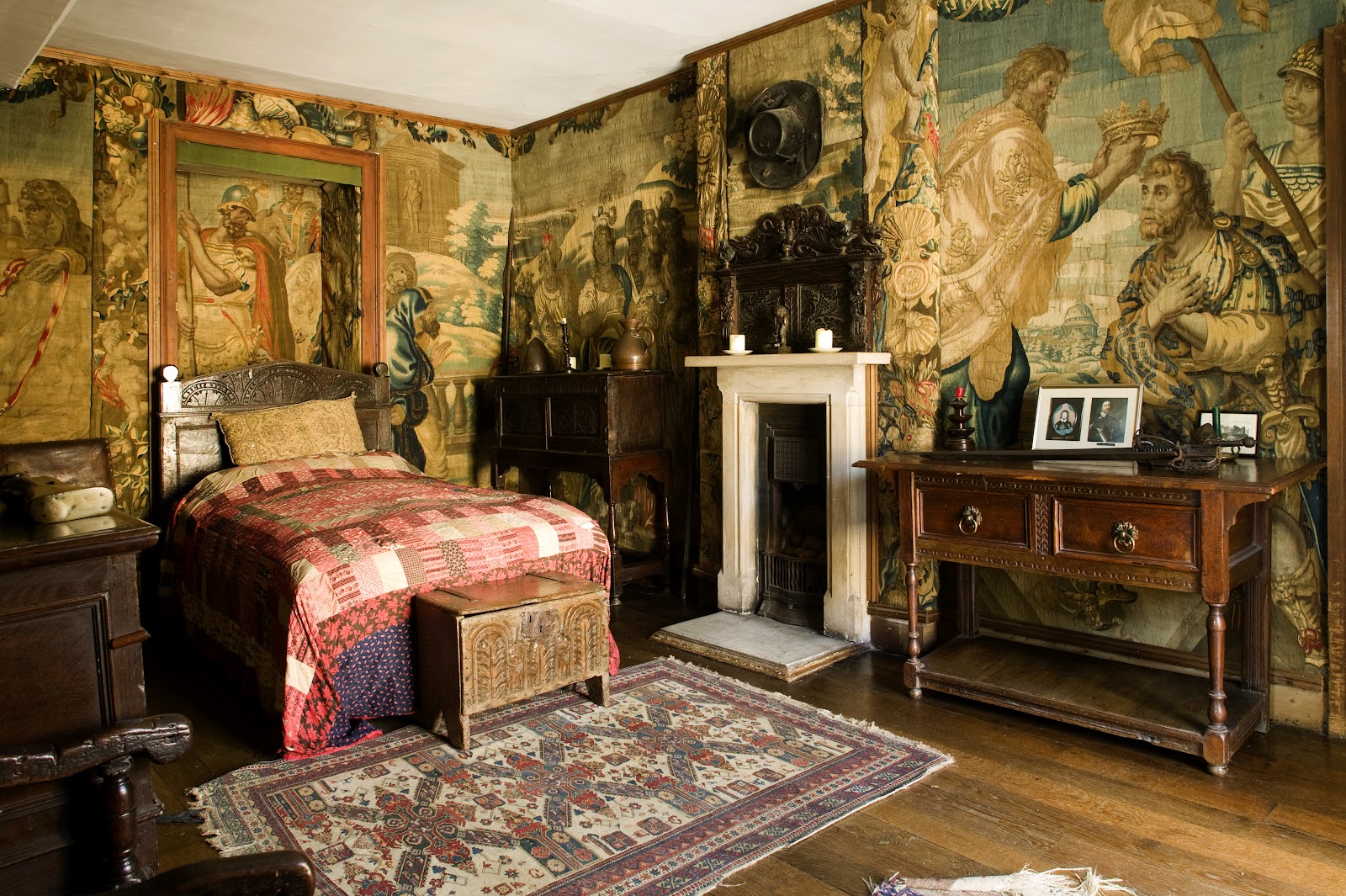 The next-door room,  (Ireton’s Room) also has a beautiful Flemish tapestry. The two rooms were used when  Ireton and  Cromwell came to persuade Nathaniel Stephens to support the impeachment of Charles 1st. 'Legend has it ' says Caroline  'that after giving his support to Cromwell for the impeachment,  Nathaniel Stephens became ill and died.  When the hearse drew up in front of the house,  it was driven by a headless man.  Nathaniel Stephens rose from his coffin when it arrived and bowed to the headless person, who then drove off, taking the form of Charles 1st.'

We return to the ground floor to visit the more recent additions to the house.

In 1903 when the Lowesley-Williams bought Chavenage,  (having rented it initially) ‘they decided it was too small for them' says Caroline with a laugh, 'so they  built an extensive new wing to include a  ballroom with a   sprung floor and service rooms.' They have now been converted into family quarters and the former Ballroom is now used for occasions which need lots of space. 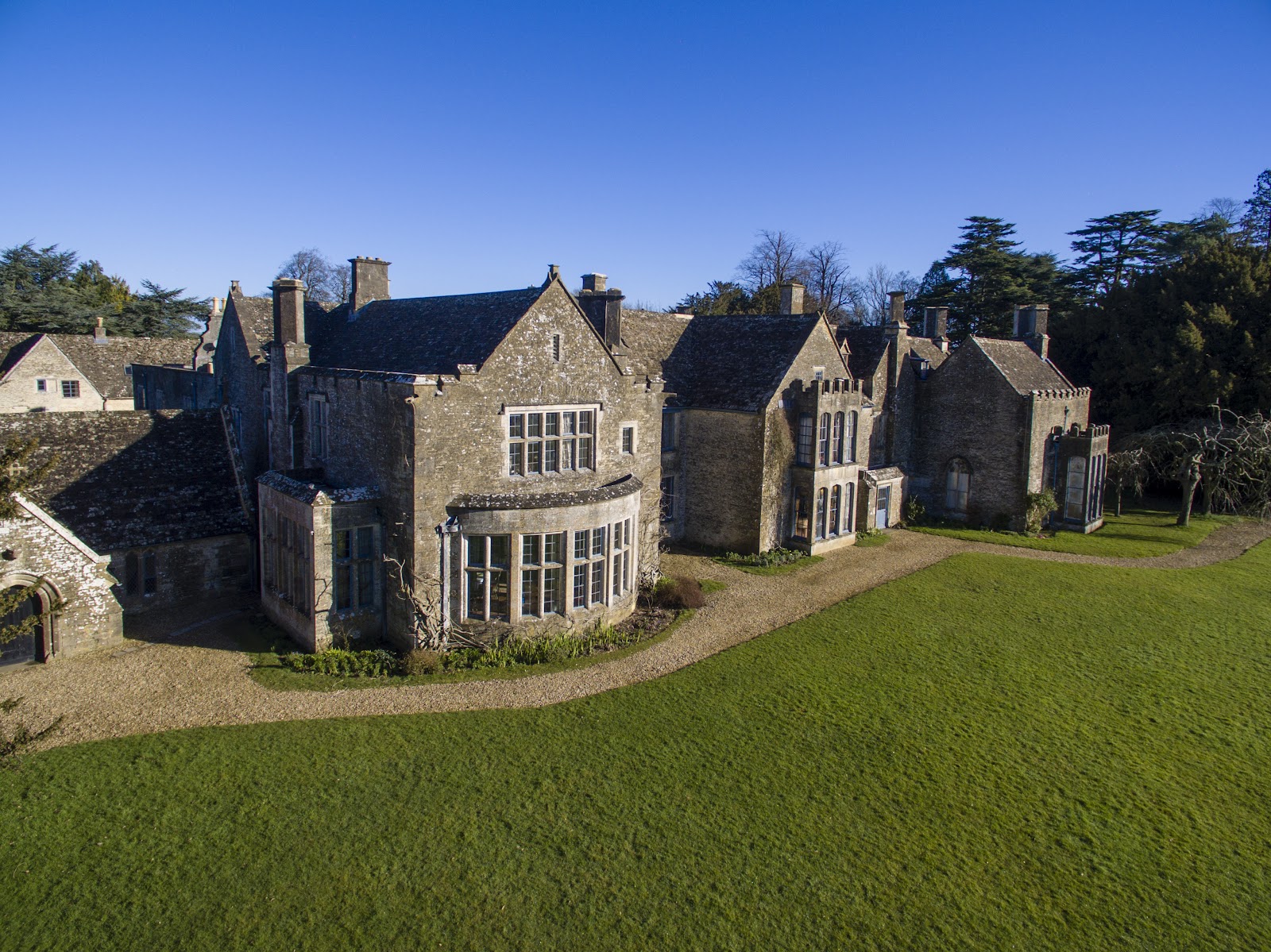 The Ballroom (to the left) which was added in 1903

Next door, is the Morning room, built-in 1800  with high ceilings and  Wedgwood green panelling.  It’s taken up almost entirely by a large billiards table.

Both the Ballroom, the Morning Room and the Oak Room look over a sweeping lawn which runs down to a Haha giving undisturbed southerly views across a  deer park and on to the  Marlborough Downs beyond. Caroline tells me that it's an astonishing  24 miles between here and the horizon and that visitors often sit spellbound gazing at the uninterrupted view. 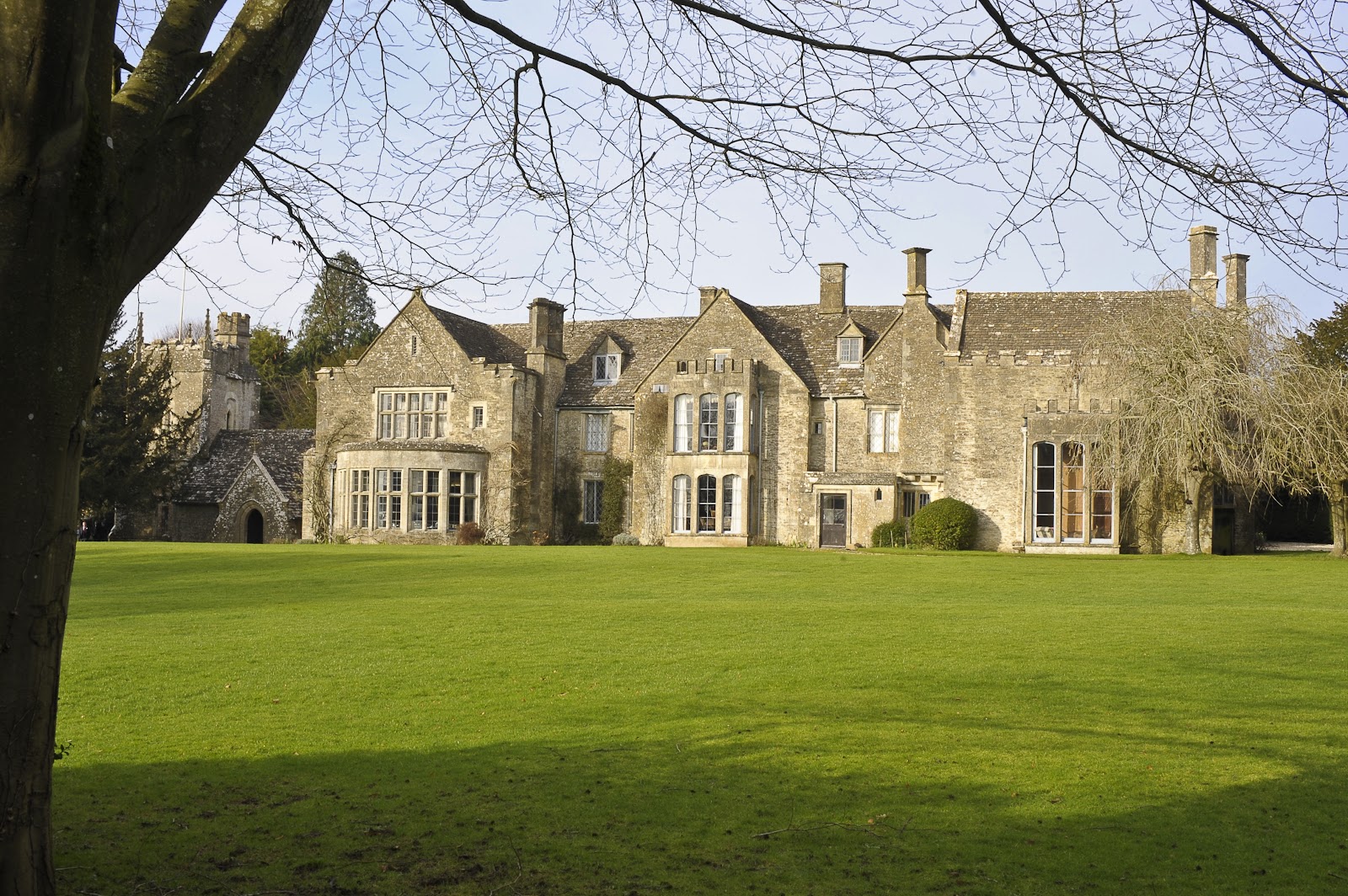 The back of The house with the Ballroom, the Oak Room and the Morning Room

The final part of my visit is the little church adjoining the house. Caroline asks when I think it was built and I hazard a guess that it could have been before the house. But in reality, the church was built - almost as a folly - in 1816 by collecting together ecclesiastic architectural gems and skilfully placing them together.  Caroline reminds me that Poldark was married here. 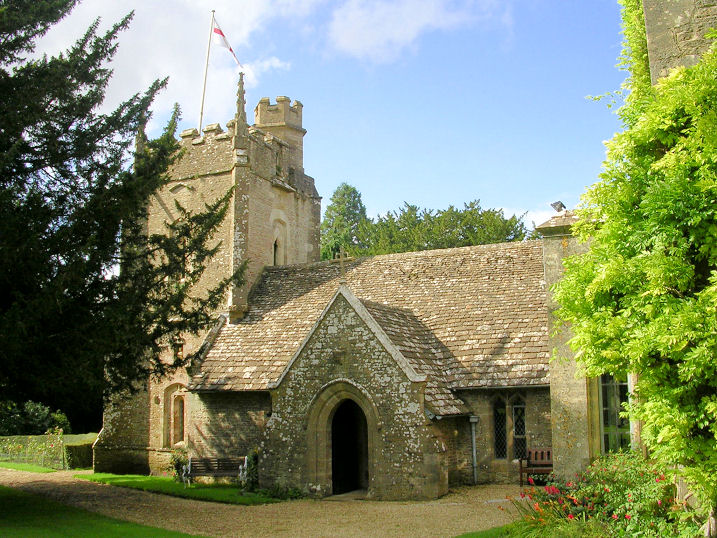 The church which was skillfully added in 1816

Caroline seems glad to have the excuse to take to a pew for a rest.

'It’s a 24-hour job running this place' she says.  'My brother, sister and myself run it with virtually no staff except a daily. It's lived in by three generations of the family: my parents, my brother  George and my sister Joanna and six of their children.  With virtually no staff we divide the jobs between us. My sister  Joanna trained as a cook at Leiths, so she’s in charge of catering, George, my brother takes care of the farm and grounds and gardens.' Meanwhile, Caroline runs the place: manning the office, taking bookings for tours and films, showing visitors around and organising all kinds of events. 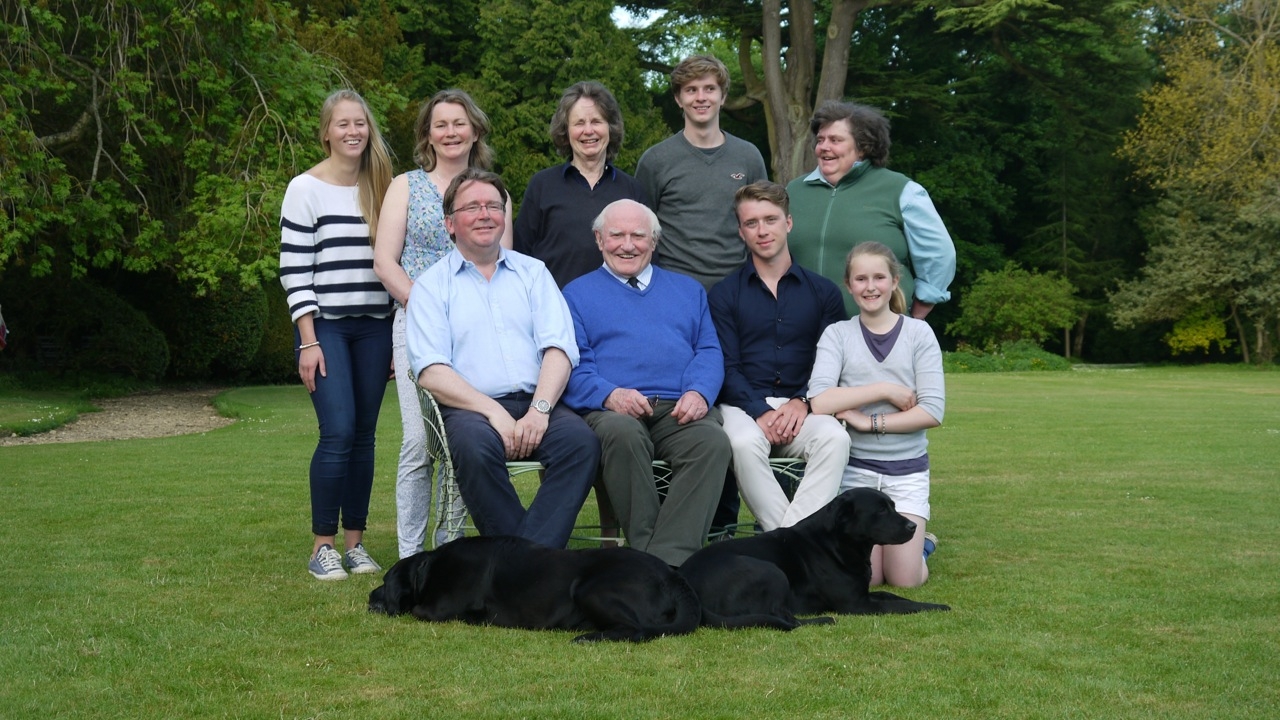 David and Rona Lowsley-Williams, with their children (Caroline, George and Joanna) and their grandchildren