As I drew up to Kiftsgate I suppose I was expecting a splendid garden to leap into life. Instead, a somewhat uninspiring Victorian house came into view. Little was I to guess what lay beyond it...

Anne Chambers who came to greet me moved into Kiftsgate in the early 80s with her husband, Johnny and they now manage the 15 acres of garden, with a small team of gardeners. We sit down in a large kitchen /living space over a cup of tea.  Anne explains that today's gardens are the cumulation of three generations of gardeners, or more precisely women gardeners,  who passed down their work and their know-how to the next generation. 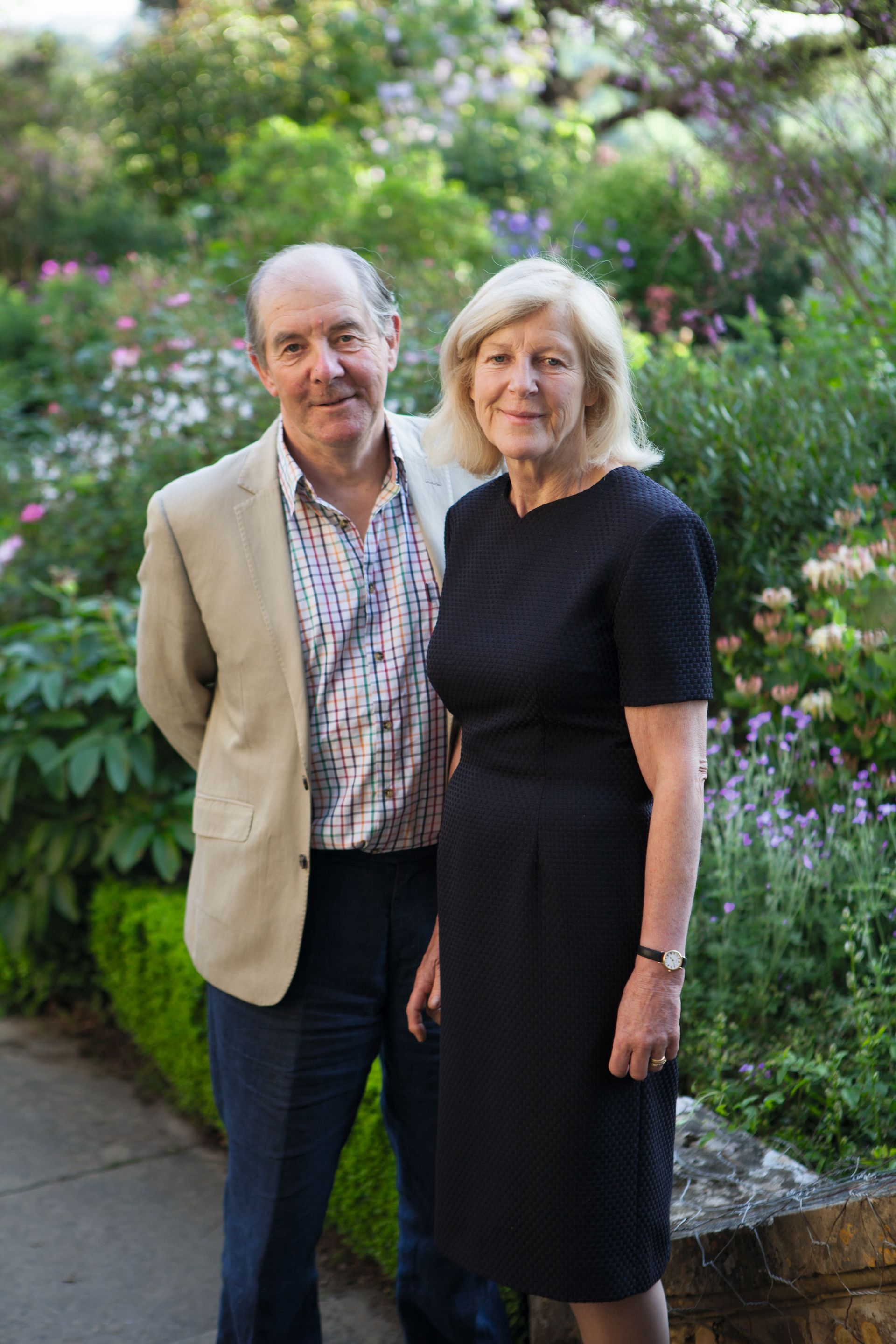 Anne Chambers and her husband Johnny

‘My grandparents bought Kiftsgate, after the war. My grandmother, Helen Muir was undoubtedly influenced by her great friend Lawrence Johnston who created the garden next door at Hidcote Manor. There was virtually nothing here except a paved area which led down to the wooded hillside.’

In the early 30s her grandmother terraced the steep banks to the south-west of the house and built a summer house with steps going down to a  lawn below.

‘During the war the garden was largely left to itself. Then my mother,  Diany Bianny,  built the semi-circular swimming pool in the Lower Garden.’  says Anne.

‘She also commissioned two sculptures from Simon Verity during the 70s and began to open the garden to the public  The White Sunk Garden was redesigned by her to incorporate a small pool and a fountain from the Pyrenees.'

Apart from upkeeping the gardens left by her mother and grandmother Anne has left her own mark. In the 1990s she converted the old tennis court into a magnificent contemporary water garden with a sculpture by Simon Allison. More recently she has added a modern stainless steel statue by Pete Moorhouse and a  semicircular mound leading up to tulip tree avenue.

So now it’s time to take a stroll around the garden. She opens a door at the other end of the room and I find myself looking down onto the spectacular garden with the more formal parts in the centre, leading up to the water garden. The central part peters out to the wilder parts: Scots pines to the left which overlook the terraced hillside, then up to the mound and paddock with the tulip avenue at the far end. 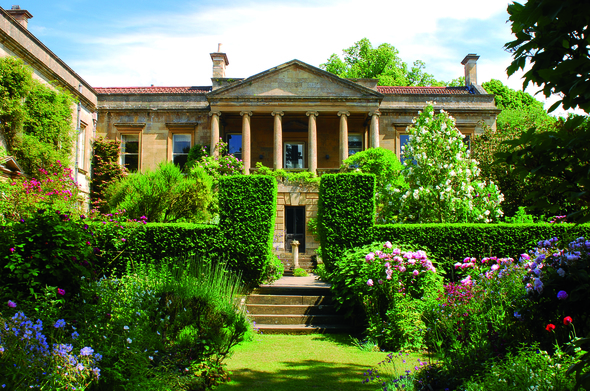 The facade of Kiftsgate

Moreover, I am astonished to find myself emerging from a glorious Georgian facade. ‘Kiftsgate was built at the end of the 19th century by Sidney Graves Hamilton who owned the large manor house down in Mickleton with this high portico front.’ explains Anne.  ‘Graves bought the land up here and built a house at Kiftsgate and then proceeded to move the facade up the hill and stick it onto the front of this house. He built a railway, especially for the job.’

Anne explains that large parts of the house including a ballroom were pulled down by her grandparents when they bought Kiftsgate and that when  she came to live here with her husband Johnny, they carried out more work to make it into the family house, which her grandmother had intended it to be when she bought it after the war.

Anne takes me on a tour pointing out the various parts which were added by her grandmother, her mother and herself. We pass the beautiful Scots pines planted around 1870 and descend the steep hill with glorious views over the Bredon and  Malvern hills, which was terraced by her grandmother,  passing by the summer house and arriving at the pool at the bottom. ‘My mother painted it black and it now fits in marvellously with the surrounding countryside,’ says Anne.

We walk back up the winding path and pass through the White Sunken Garden.  'It was originally white when planted by her grandmother but other colours have now been added.' she says. It has a  pool and fountain in the centre.  ‘My mother bought the fountain at the Chelsea Flower Show,’ she says. 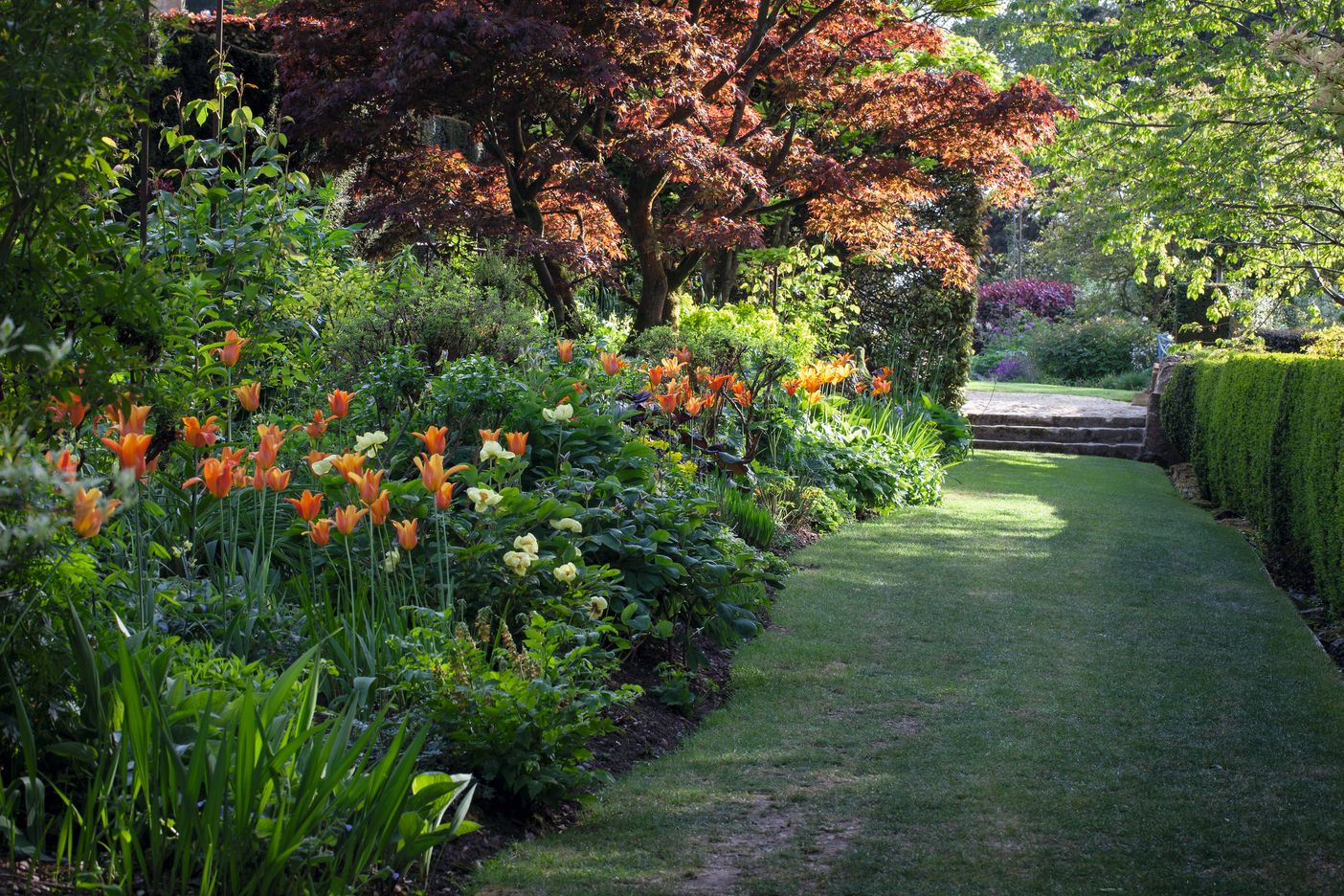 We then pass through the Rose Border and she shows me the famous  Kiftsgate Rose. It bears fragrant old-fashioned  white roses in summer and red hips in autumn,  but above all,  it’s known for its prolific rambling which Anne warns ‘can pull roofs  off houses and is best allowed to grow up something like a dead tree stump.’

‘My grandmother bought it in the 30s and it was left to itself during  the war.’ she explains.  In the late 40s, Graham Stuart Thomas, a rose expert identified the rambler as a Rosa filipes and it was then named after the garden.’ 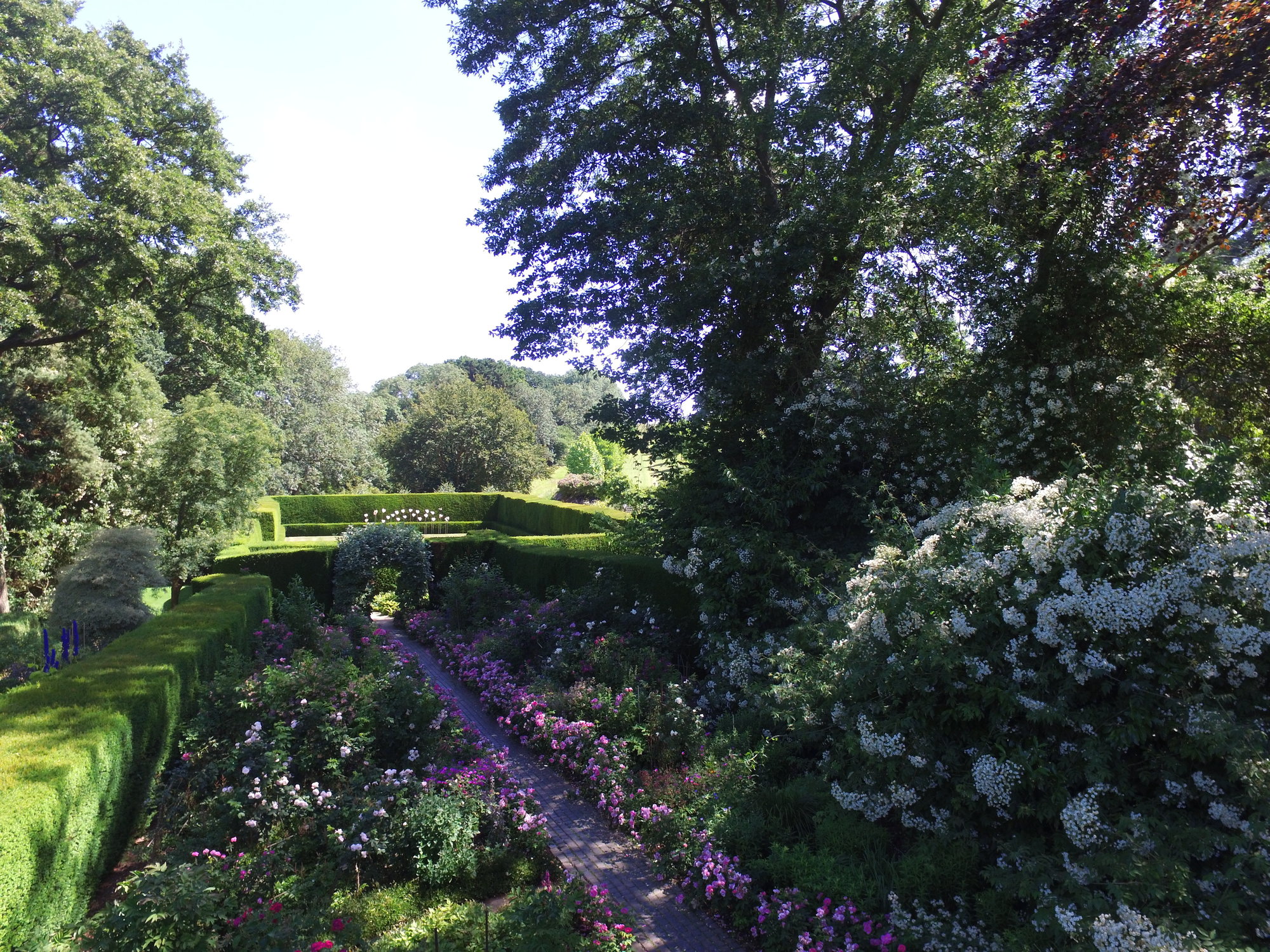 She then shows me her addition to Kiftsgate; the Water Garden,  which replaced the old tennis court, ‘which was in such a bad state that winning was a matter of luck rather than talent’ adds Anne. A  rectangular pond covers the doubles area with white paving stones contrasting with the black water... At the far end, 24 stainless steel stems topped with gilded bronze leaves sway in the wind to the sound of water dripping down the leaves. 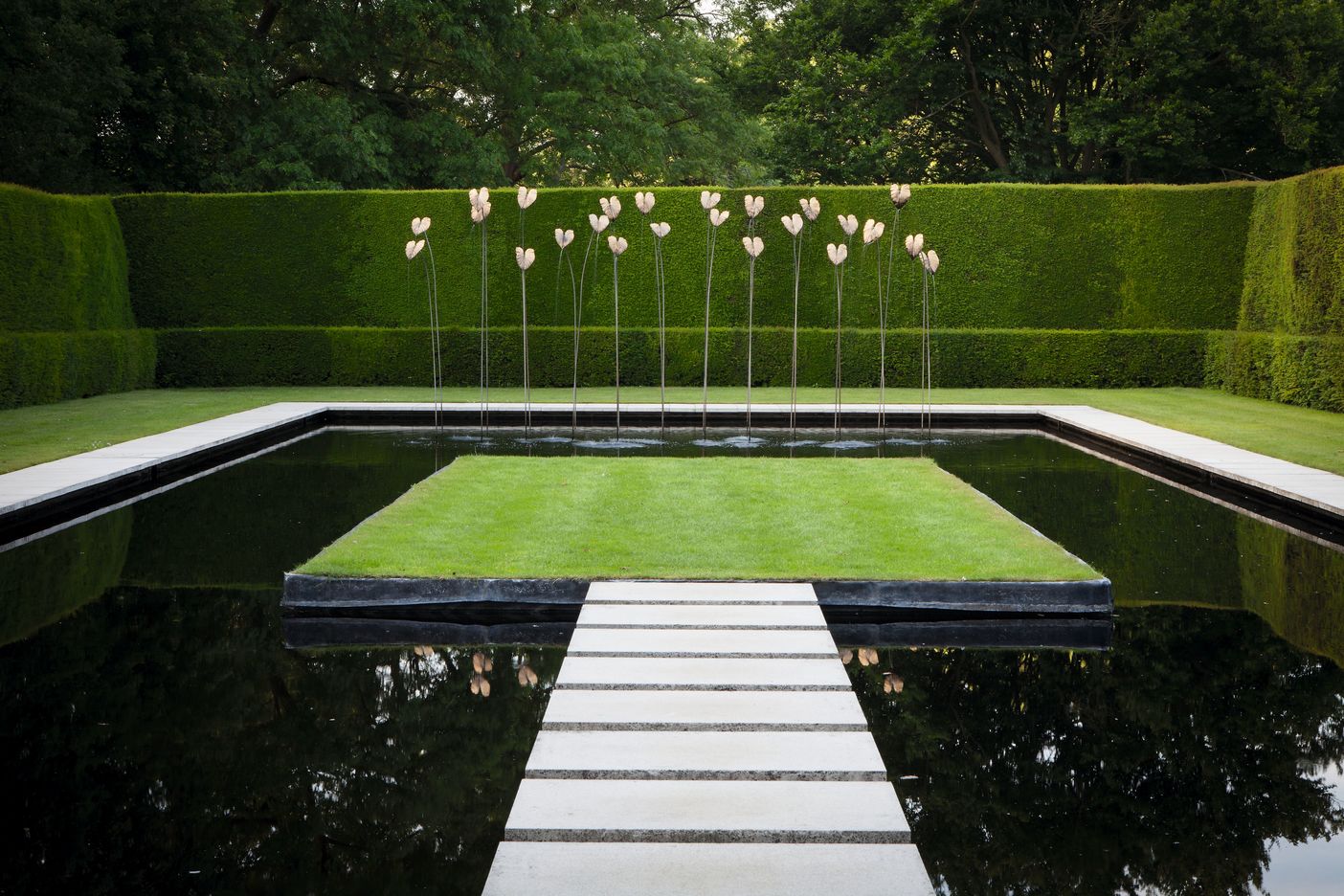 Finally we visit the Orchard and Mound. The earth dug out from the Water Garden has been used to ‘build’ the mound. The idea behind the orchard was to allow wildflowers, namely tulips, camassias and narcissus to grow up through the grass. Anne explains that it’s a special variety of grass that doesn’t grow much,  so that it doesn’t need to be cut. This is valuable information for an amateur gardener like me, who has tried to plant ‘meadow seed’ and wondered what to do when the grass ‘flops over’ up because it needs cutting...