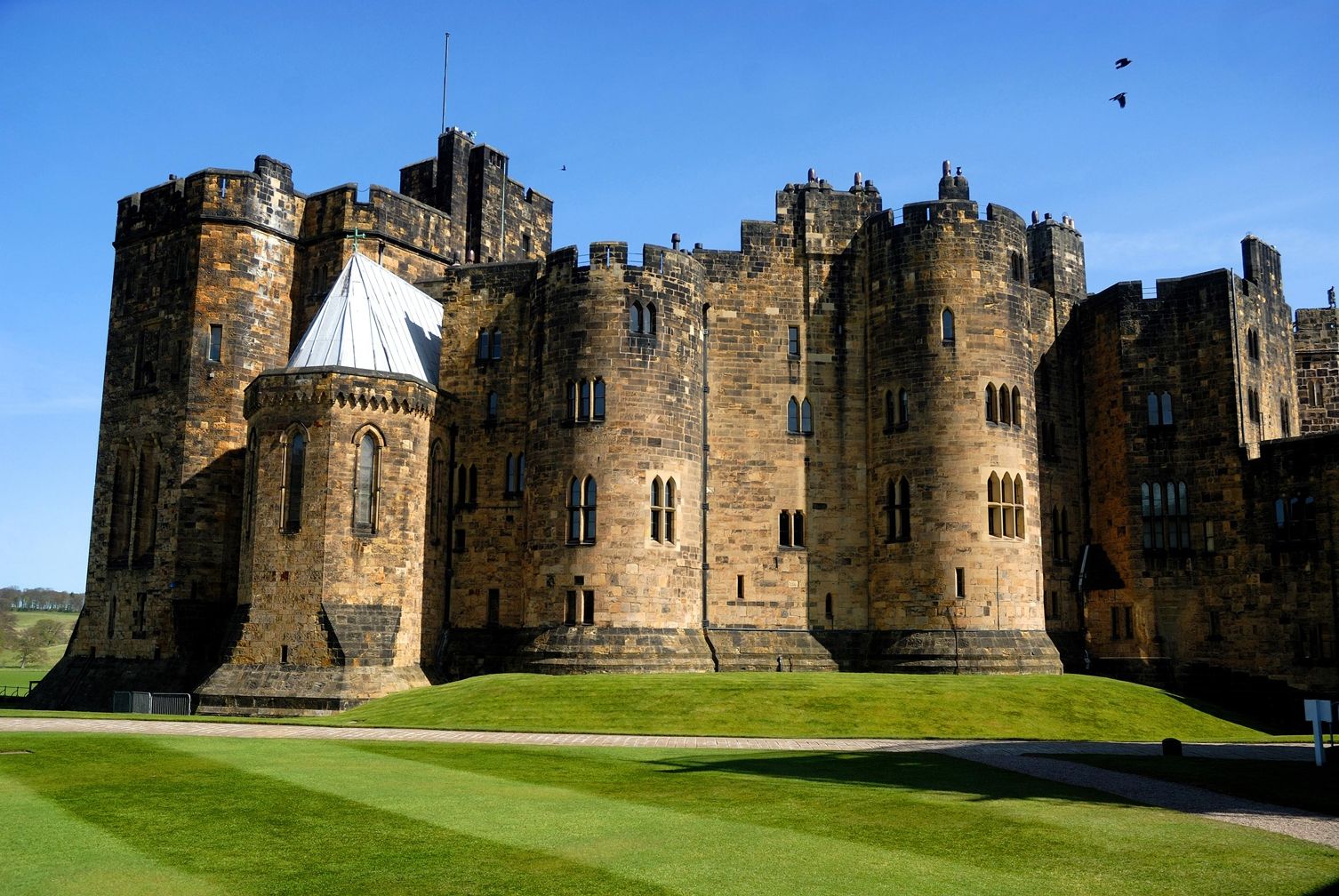 Alnwick dates back to the late 11th century, but was bought by Henry Percy  in 1309 and has been in the family (more often known as the Earls and lately Dukes of Northumberland), ever since.

In 1572,  Thomas Percy (7th Earl of Northumberland), a  Roman Catholic,  was executed for conspiring to release the imprisoned Mary, Queen of Scots with the objective of overthrowing the Protestant Queen Elizabeth 1st. After this,  Alnwick Castle was unlived in  for many years.  It was not until the the second half of the 18th century that it was largely renovated by Robert Adam. The interiors were mostly decorated in a Strawberry Hill gothic style,  unlike his usual neoclassical style.

In the 19th century much of  it was replaced by Algernon, 4th Duke of Northumberland who paid Anthony Salvin £250,000 between 1854 and 1865 to remove the Gothic additions and other architectural work. Salvin is mostly responsible for the kitchen, the Prudhoe Tower, the palatial accommodation, and the layout of the inner ward. Although some of Adam's work survives, the rooms on show to the  public were redecorated in an opulent Italianate style in the Victorian era by Luigi Canina.

Alnwick Castle is truly a place of in-betweens: nestled right between England's most northerly city and Scotland's most southerly, it makes the perfect day trip from either side of the border; whilst its status as a Medieval relic, a film set and a family home means that the place has an essence of something for everyone.

The Castle’s status as an in-between continues right through to its visitors: kids, adults, adults who act like kids and kids who act like adults. Keep the more childish amongst you occupied at the daily Harry Potter style events, including Broomstick Training, where you can pass your broomstick driving test tutored by some of quidditch’s best professors.

Alnwick Castle is the original Hogwarts, but the true magic comes from somewhere beyond Rowling’s writing -- the grandeur of the architecture and the quintessentially British pastoral gardens is enough to transport any visitor to a realm unknown. Spend your day wandering the grounds of the castle steeped in Medieval history or duck out of the rain and explore the interior, complete with exhibitions on everything from the family of the house to World War One to the filming of Downton Abbey. If you're lucky, you might get the whole family to meet in the middle for a 10-Minute Talk, a nifty idea from the educators at Alnwick all about one of the many stories of the Castle, compacted down into just 10 minutes.

With a joint ticket, you can cram in a wander through the Alnwick Garden too, which is constantly at the heart of charity work, such as that with the Elderberries and the Sprouts programme. In terms of the gardens itself, find yourself within the Poison Garden one minute and one of the world's largest tree houses the next. As for the nettle mojitos you can find at the Treehouse Restaurant? I'll take ten.