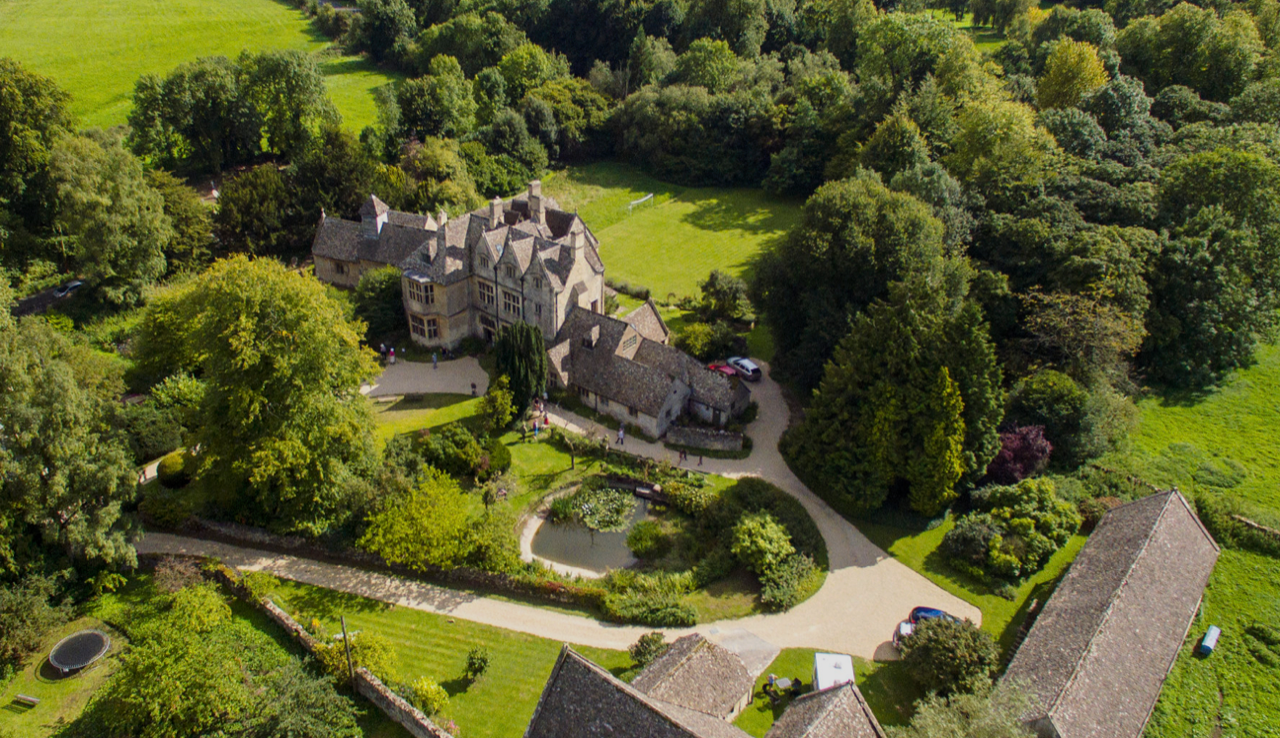 Whittington Court,  occupied by Jenny Stringer, her son, daughters and grandchildren remains a very family house. The family inherited it  33 years ago and somewhat unexpectedly when Jenny’s godmother left the semi-derelict house to Jenny’s mother

When I fix a time to meet Jenny she says she’ll be around, though busy planting trees and I realise after I’ve spent an hour with her and looked around the house and the adjoining church,  how important the preservation of the environment is to her and how this makes  Whittington what it is today.

The front of the house

I arrive on a chilly March morning and look for the front door.  The house is a charming: a disorderly grouping of gables and bay windows with a central part which is three-storied, between the two wings.

The door which seems most likely to be the front door has an old stone mounting block in front of it. Later Jenny tells me that the original owners, the Cottons,  probably intended to build the house in the traditional Elizabethan E shape but the east wing was built in the 17th century and the west kitchen wing in the 19th century. 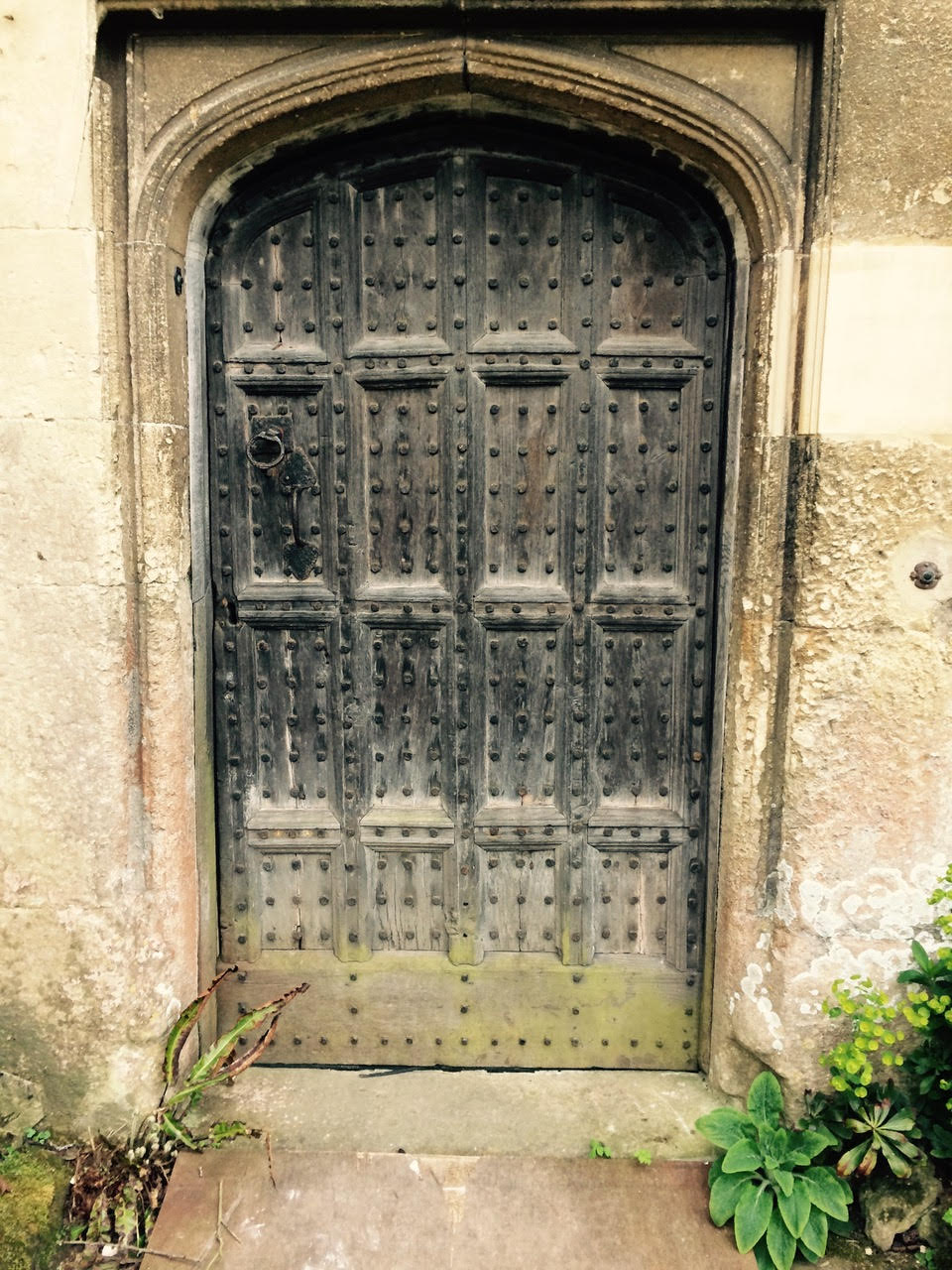 I follow Jenny through the entrance hall and up a  huge  carved Jacobean oak staircase which seems to be the epicentre of the house. On the second floor we reach  Jenny’s favourite room: her studio, which is bathed in a  silvery green light thanks to the original glass panes of the huge bay window.

Jenny explains that her mother had made great friends with the former owner of the house when they were students;  that they had remained close friends and that when she died she left the house to her mother. ‘It was almost derelict’ she says, ‘but my father was a curator at the V&A and that helped with the restoration.’

The origins of the house are not exactly clear but it seems several ‘houses’ have occupied  Wittington.   Anglo Saxon remains of a medieval village  were found near a  Roman villa which was discovered in 1949 and excavated but filled in again.  For most of the Middle Ages, the ‘property’ belonged to the deCrupes family but was confiscated by Henry VII, until in 1545 the Cotton family of Carmarthen acquired the land and  built the current house. It was more or less on the site of the previous house which was on the south lawn encircled by the moat which  runs around two sides of the garden today. The huge mullioned windows were probably added between the 16th and 17th centuries when glass, which was a sign of wealth, had become available. 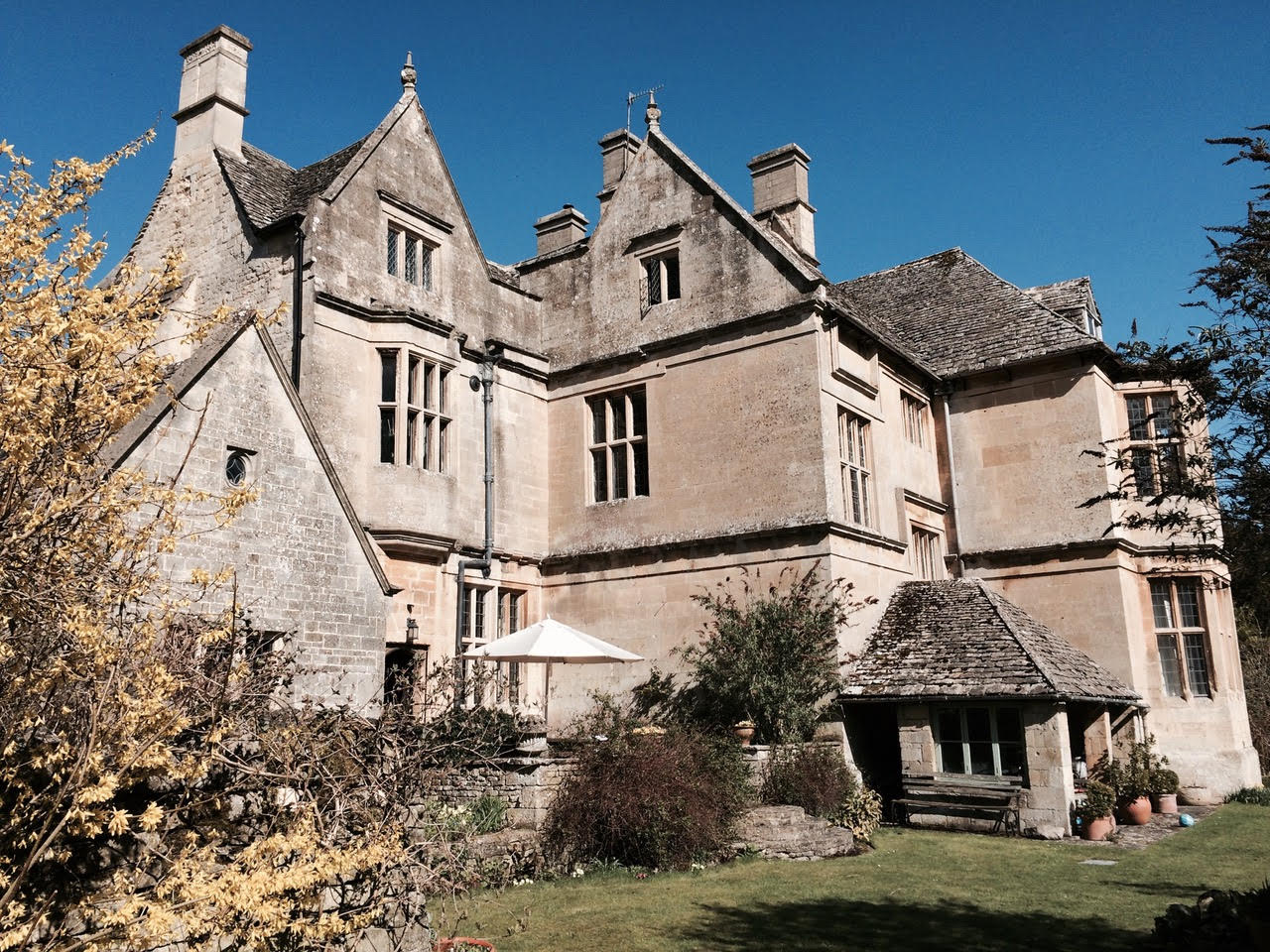 ‘When my parents inherited it, my husband and I had just bought an 18th-century house in Norfolk and were restoring it, but we moved into Whittington with them to pool resources. There are now six members of our family living here.’

The restoration of the house has been an ongoing project, which has been complicated by the fact that four acres around the house (except the kitchen garden), as well as  the cottages in the village, are protected, meaning that it was impossible to sell them to pay for the restoration.  ‘As a result, it’s taken 33 years to do up 20 cottages,’ says Jenny. 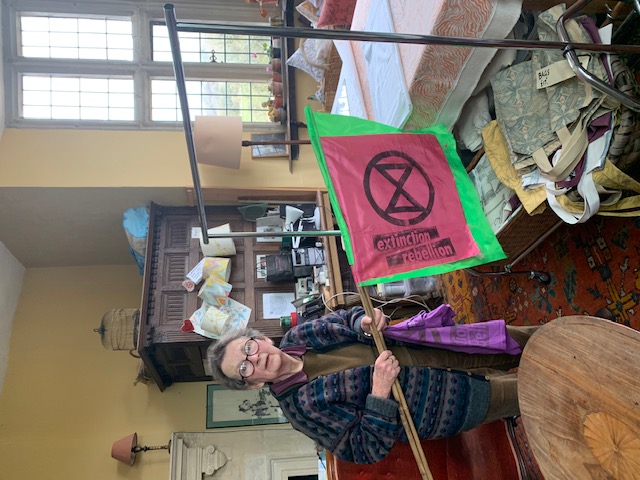 ‘I wanted to be a potter when I moved in,’   she says ‘but it seemed so impractical - always having to try to get my hands clean when anybody arrived. But I saw an ad for printing in my art college. My  interest in pottery was to use more colour and pattern, so printing fitted the space.’  A variety of prints of all kinds and colours and on all types of fabrics are displayed in her studio and I quickly begin to appreciate how block printing can be used to transform an unused  piece of fabric into anything and everything from a kimono to cushion covers, table cloths, lampshades... 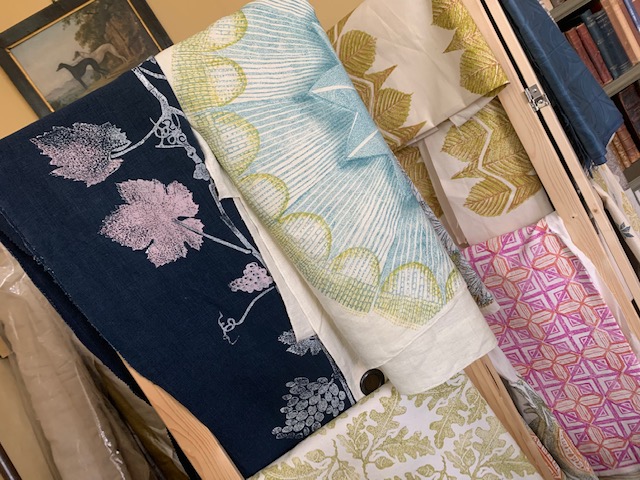 And I suddenly realise how I could  transform  the table cloths, sheets, pillowcases which I am about to throw out.   Jenny shows me the tools which are used to create a block, by cutting patterns from lino or wood, sources of inspiration for new patterns  and  the ink… Nearly everything seems to have been recycled 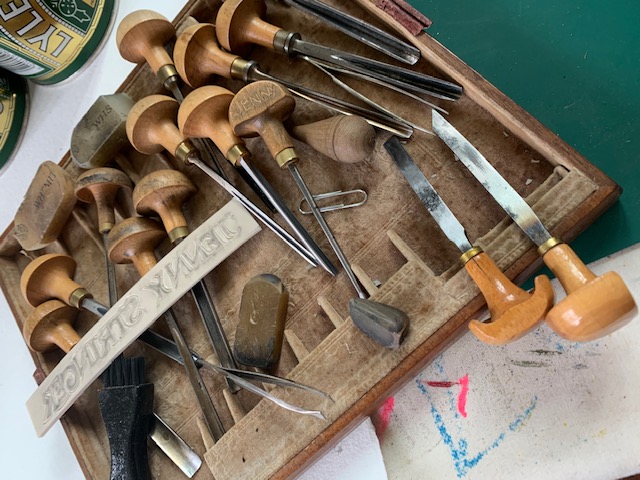 The theme of recycling runs everywhere and is clearly dear to Jenny’s heart. Jenny holds classes allowing people to come in groups to create almost whatever they want - for example, a tablecloth for a birthday party. It doesn’t come as much of a surprise when she produces a  flag and a t-shirt which she printed for  Extinction Rebellion.

By the time I leave her studio, I am completely seduced by the art of block printing and I’m already planning to give it a try.

Jenny’s printing is not the only printing activity at Whittington. At the entrance,  in the former gardener's cottage, her cousin runs the Whittington Press which prints illustrated books including wood-engravings and font types, nearly always printed from the original block, plate or stencil.

At the bottom of the staircase, we stop to admire a display of glass in a cabinet which includes Roman,  Venetian, Continental and English pieces.

The dining room has mostly original furniture and items which came with the house including a mortuary sword. Opposite, is the library with a huge original Jacobean, stone fireplace and a stunning bookcase which was built around 1800. Though it looks as though it was ‘made to measure’,  Jenny tells me that it came from Sevenhampton, one of the three houses belonging to the Lawrence family who were the former owners.

In the hall dummy boards (life-like cut-outs of people which were positioned around the house)  have been transformed into chairs.

Before I leave we pop into the tiny adjoining church which dates back to the 11th or 12th century and contains the 1556 memorial brass of Richard Cotton who built the house. 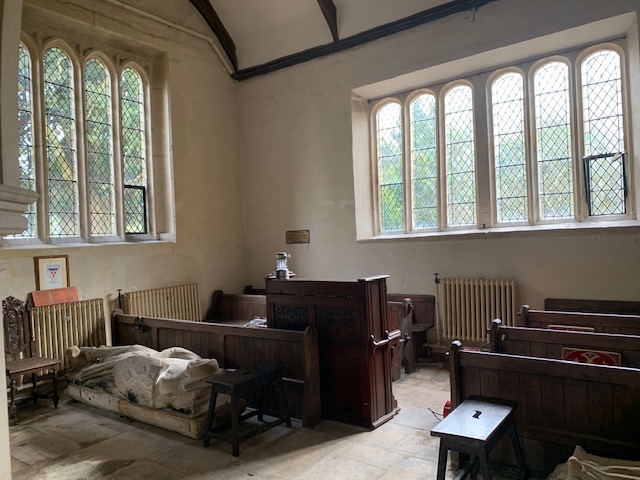 The church which dates back to the  11th or 12th century

On my way out to the car, I admire the Tithe Barn, another beautiful part of the ensemble. 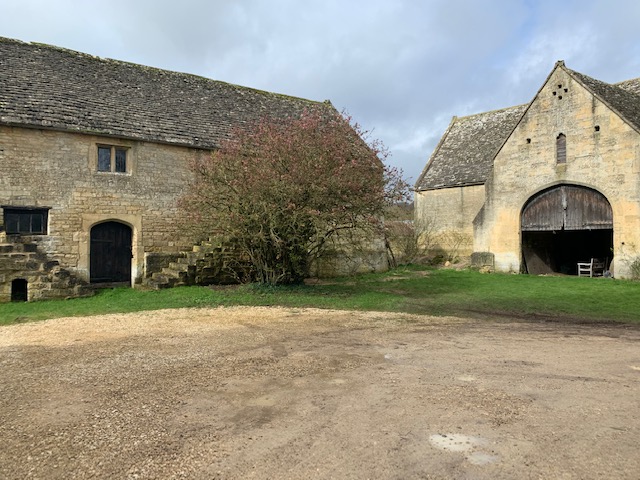 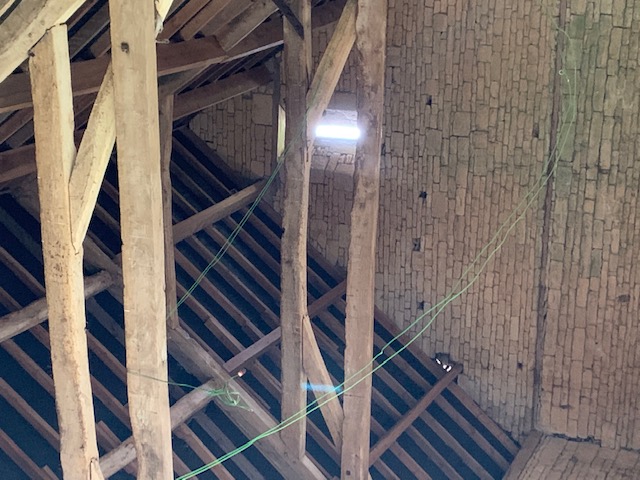 The timbers inside the tithe barn.